African buffalo, also known as Cape buffalo (Syncerus caffer), are an extremely valuable species to hunters as one of Africa’s traditional “Big Five” game species. So when reports started coming in of buffalo declines occurring in Tanzania’s Ruaha National Park, everyone became concerned. In 2014, SCI Foundation partnered with the Health for Animals and Livelihood Improvement (HALI) project, a joint effort of University of California Davis researchers and the Tanzanian government; to better understand the ecology of buffalo in Ruaha and the disease issues that may be affecting the population.

The first health data from buffalo in Tanzania’s Ruaha National Park was collected in 2011, when a total of 30 young buffalo were tested for bovine tuberculosis (bTB) in association with another study.  Of the tested buffalo, 10% tested positive.  During the SCIF funded study, the bTB prevalence was found to be approximately 20%. The difference is likely because buffalo from all age groups were tested in the study. 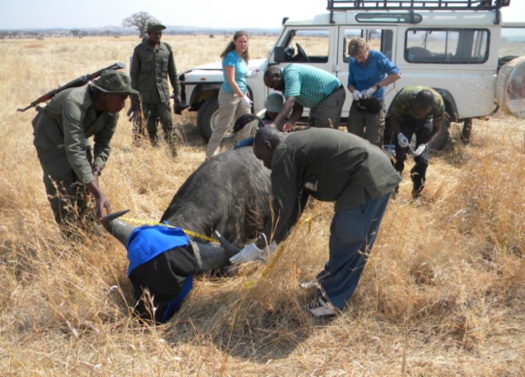 African buffalo being sampled by the RNP and HALI capture team.

Although tuberculosis does not appear to be affecting population growth, it can have negative effects during times of extreme environmental stress.  Similar to what has been documented in SCI Foundation’s sponsored study of hippopotamus on the Ruaha River with the University of California Santa Barbara, the changing aquatic ecosystem, combined with the effects of bTB, may have stressed the population and caused the observed decline.  Buffalo are strictly water dependent, meaning the same upstream rice irrigation practices that are limiting hippos’ access to water are also hindering buffalo.

The Great Ruaha River is frequented by the same herds year after year, migration information that was not known before this study. One of the significant revelations this project generated was how buffalo herds move in relation to water.  During the wet season, herds were in good health with low parasite loads.  Calf production varied with rainfall in the previous wet season and was lowest during the drought of 2012-13, but generally within what can be expected for stable buffalo herds in eastern and souther Africa.  However, the buffalo were still in good health in general, indicating that the shrinking of the Ruaha River during the 1990’s and early 2000’s possibly contributed to the population decline.  The size of the buffalo’s range has also shrunk significantly since the late 20th century, due to human activity.

Beyond advancing scientific knowledge about the buffalo and their movement, the same data helps Ruaha National Park rangers combat poaching, which is an ongoing problem along the park’s borders.  Data from collared buffalo has not only yielded information on herd movements within the park, it also helps researchers more accurately predict seasonal migrations outside Ruaha as well.  As an anti-poaching tool, areas of increased risk for poaching will also be identified using the same buffalo movement data.  Unlike elephants, which are primary targeted for their ivory, buffalo are poached to support the bush meat trade in rural areas.  As dry seasons often lead to more poaching events, the long term sustainable monitoring program this project creates will allow for responsible wildlife management response.

The project’s researchers speculate that while decreased water flows may have caused prior declines, buffalo populations could recover if water flow increases.  River flow has slowly increased since the Usanga Game Reserve was added to Ruaha Park in 2008. Continuous monitoring of this trend will be needed to determine how much water flow impacts buffalo populations in Ruaha.

By far the greatest long-term benefit of this project is the knowledge Tanzania has gained about the conservation and sustainable use of buffalo.  SCI Foundation is proud to continue supporting this effort, and we eagerly await results as collars are removed and analyzed in September of this year. A final report is expected in January of 2018. This project, together with the Ruaha Hippo Project, has demonstrated that a healthy aquatic ecosystem is key to the conservation of Ruaha’s large game animals.