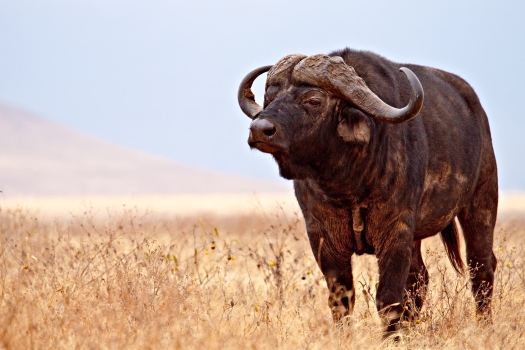 As the most dangerous game in the Big Five, known in Africa as Black Death, the Cape buffalo is an important species economically. Until recently, large populations and dispersing herds of Cape, or African, buffalo within Tanzania’s Ruaha National Park were sources for the surrounding game reserves. Hunting operations outside the park generate substantial revenue for local communities. But over the past few years the buffalo population has experienced a mysterious and troubling decline.

Ruaha National Park is one of Africa’s largest national parks, slightly smaller than the state of New Jersey. Data previously collected from collaring buffalo and conducting aerial surveys has provided an understanding of how different herds move around the park throughout the wet and dry seasons and helped identify areas of concern for contact with domestic livestock. Disease screening of captured individuals confirmed the presence of bovine tuberculosis (bTB) in 10% of the sampled buffalo.

Despite the bTB disease, observed calf to cow ratios fall within the range for stable buffalo populations, and Ruaha’s herds exhibit similar home range sizes to other herds in East and Southern Africa. These findings are good news for the future of buffalo, as well as hunters travelling to this part of Tanzania, the area’s safari operators and local communities.

The project’s research team is currently conducting the 2016 dry season survey and continuing to screen buffalo for disease. In the future, the team hopes to place collars on all known herds within Ruaha to better monitor movement and use that data to inform anti-poaching operations. This science will ultimately improve the management of buffalo in the greater Ruaha National Park and wildlife management area.

With bovine tuberculosis present in the Ruaha buffalo herds, the team is also concerned for the health of local predator species. Little is known about the ecology, health or behavior of the park’s lions. Ruaha National Park is interested in funding a project on lion health, movement and lion-buffalo interaction.

Project staff recently presented these initial results to the Tanzania Wildlife Research Institute and published a scientific paper on the demographics and parasites of African buffalo in the African Journal of Ecology. The Tanzania Buffalo Project plans to publish more data from their research in the next year.