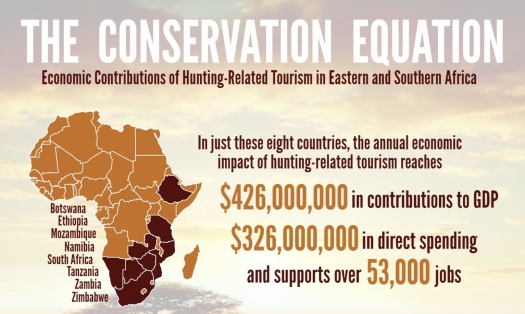 A study recently conducted for SCI Foundation by Southwick Associates, “The Economic Contributions of Hunting-Related Tourism in Eastern and Southern Africa,” measured the size of hunting-related tourism’s contributions to the local, national, and regional economies of eight African nations between 2012 and 2014. The study reveals that in-country spending per hunter in Botswana, Ethiopia, Mozambique, Namibia, South Africa, Tanzania, Zambia, and Zimbabwe averaged $20,600 during the average 11-day hunting trip. This translates into $326 million of direct spending in these eight countries and, when the impact of these expenditures exchanging hands within the economies is calculated, the spending total climbs to an estimated $426 million. In other words, if hunting did not take place, the gross domestic product (GDP) of these eight countries would shrink by at least $426 million.

On the African continent, at least 345 million acres of land (larger than the states of Texas, California and Montana combined) are under conservation management thanks to hunting. Overall, the amount of land managed for hunting is 22 percent larger than the combined area of land protected as national parks. Hunting concessions provide vital habitat and corridors that link national parks and other protected areas, allowing wildlife the freedom to roam. Hunting is the economic driver that prevents this land from being converted to agriculture and lost to wildlife forever.

At the country level, these dollars not only boost the economy, they also provide critical funding for wildlife conservation and law enforcement. Without these funding mechanisms, many nations would be unable to protect wildlife and habitat.

At the local level, income generated from hunting safaris has made a major difference in improving lives, especially in those areas where rural Africans have the right to manage – and thus benefit – from a wide range of game species on their communal lands. For communities, these earnings have translated into improved medical and educational facilities, as well as jobs. Hunting-related tourism has created over 53,000 jobs in the eight studied countries.

For wildlife, these earnings have resulted in the protection of critical habitat, the strengthening of anti-poaching efforts, and a significant reduction in retaliatory killing. 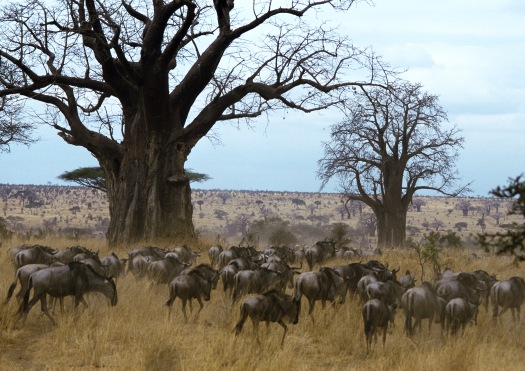 A discussion of assets and liabilities typically takes place in the world of finance. These two words, however, are critical to understanding the dynamics of wildlife conservation in sub-Saharan Africa.

Habitat is the food, water, shelter and living space needed by all living things. From aardvark to zebra, all species require habitat in sufficient quantity and quality to survive.

Sub-Saharan Africa’s human population is around 800 million, and is projected to almost double in the next 35 years. Nearly 80 percent of all farms in the sub-Saharan region represent small-scale, low-yield subsistence agriculture. Some 25 percent of the population is considered undernourished.

With a rapidly expanding population, more and more of the region’s natural habitat is being converted into cropland, pasture for livestock, or is being mined or logged. Even rangeland and forest previously considered unsuitable for production is falling to the axe and plow. To minimize losses, animals that raid crops or livestock are poisoned, trapped or snared. As a swelling population continues to encroach upon natural areas, conflict between humans and animals is also increasing.

As long as rural villagers consider wild animals as a liability, habitat destruction and retaliatory killings of marauding animals will continue unabated; indeed, will likely increase. However, when wild animals are seen as an asset, local communities then have an incentive to conserve and enhance wildlife and habitat. As the Southwick Associates study finds, hunting provides the opportunity to transform wildlife from a liability into an asset.

In sub-Saharan Africa, both photo safaris and hunting have demonstrated that wildlife can become an asset; a valuable community resource that provides significant and sustainable economic benefits while, at the same time, encourages good conservation practices.

Photo safaris and hunting should not be viewed as conflicting but, rather, as complimentary activities. While catering to different customer segments in different locales, both generate considerable and much-needed revenue and jobs for rural communities.

However, photo safaris are generally feasible only in select national parks and game reserves that represent a small fraction of the vast land area of sub-Saharan Africa. Many areas in this region are unsuitable for photo safaris because they lack animal density or species diversity, tourism infrastructure, or are composed of vast acres of thick bush that limit wildlife viewing.

Hunters are generally happy to travel to Africa’s remotest areas – places that are ill suited for photo-tourism. In fact, hunters often seek out the most unspoiled and rugged wilderness areas furthest from human disturbance. The asset ratio of hunting is one of its greatest strengths, meaning that hunting generates high revenues from a low volume of individuals and does so with minimal impact on the environment. Contrast that with the common ecotourism model of low revenues, high volume of individual and a large footprint. Hunting often takes place in places where other economic opportunities are limited or non-existent, and thus the jobs it provides to rural communities are immeasurably valuable.

The Southwick Associates study found that the distinction between hunter and tourist is blurred. Hunters, on average, spent an additional three days in the country they visited participating in a variety of activities that contribute to the national economy, such as shopping, photo safaris and other tourism-related activities. Hunting parties also included one additional non-hunting member on average, meaning that hunters are bringing along others who are adding to the overall economic contributions generated by the direct hunting activity.

Conservation can be extremely effective when local communities are able to directly benefit from wildlife on their land. The Communal Areas Management Programme for Indigenous Resources (CAMPFIRE) in Zimbabwe is an excellent example. The CAMPFIRE program protects over 12 million acres of wildlife habitat and benefits 25 percent of all households in Zimbabwe. Hunting provides 90 percent of the program’s revenue.

With wildlife viewed as a communal asset, poaching is discouraged among community residents. Additionally, income from hunting is used to train game scouts and support anti-poaching patrols.

With hunting providing an economic incentive for conservation, Namibia’s elephant population has increased from 7,500 in 1995 to around 20,000 today. Lions, white and black rhinoceros, and numerous plains game species have also grown in number and are now viewed as highly desirable assets by communities for the benefits they bring. Hunting has transformed Namibia’s wildlife from a liability to an asset.

In South Africa, where private ownership of wildlife is legal, many areas that were degraded through overgrazing by livestock have been converted to game ranches. Native species have been re-introduced to these natural landscapes, resulting in significant increases in wildlife populations and improved habitat. The southern white rhino, at one time nearly extinct, now numbers nearly 21,000. The recovery of southern white rhino is one the most remarkable conservation success stories ever documented, and is directly attributable to the economic incentives provided by hunting in South Africa. 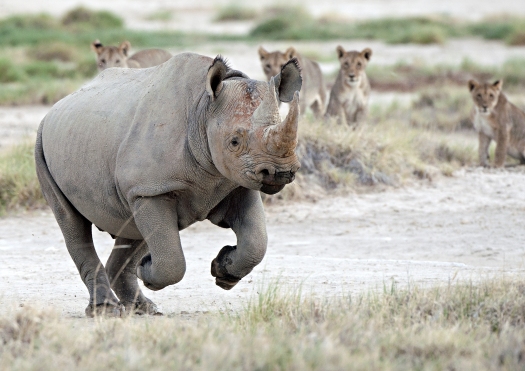 The Hype of the Big Five

While the hunting of Africa’s “Big Five” species (lion, leopard, buffalo, elephant and rhino) receives widespread media attention and seems to generate the most controversy, the Southwick Associates report finds that common plains game species make up the bulk of animals taken by visiting hunters. Commonly abundant and thriving species like zebra, wildebeest, impala, kudu and warthog fuel the engine that keeps hunting economically viable in Africa. Hunting of these species is rarely, if ever, controversial, and these species represent a large proportion of meat consumed domestically in sub-Saharan Africa. If hunting were stopped, the availability of native species as a food source would disappear, as would wildlife, inevitably being displaced by domesticated species like cattle and goats.

Photo safaris and hunting are complimentary forms of land use that both have a proven record of giving communities and landowners a financial incentive to preserve habitat and promote wildlife conservation. In turn, the significant revenues from these activities have helped to improve the lives and living conditions of many Africans, especially those in rural areas. No one should pit photographic tourism versus hunting as competing policy choices. Both are valuable, and both hold great potential to secure a future for Africa’s wild animals and the rural communities that must coexist with them.

Over 80 percent of hunters surveyed by Southwick Associates said they would not have gone to Africa if the opportunity to hunt were not available. Clearly, if hunting were stopped in the eight countries studied, a large portion of the $426 million economic contribution to these nations’ GDP would be lost, along with thousands of jobs. Vulnerable rural communities would bear the brunt of this cost, and they would pass this cost along at the expense of wildlife and habitat.

Any discussion of wildlife conservation should be practical, not ideological. Wildlife policy makers need to consider what works, and what does not. In this regard, hunting, which brings in hundreds of millions of dollars and supports thousands of jobs, has shown it is a critical force in providing an economically viable and environmentally sustainable future for Africa’s wild animals and wild places.