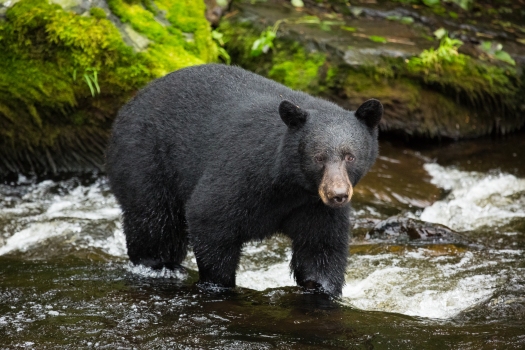 The Missouri Black Bear Project is producing new scientific results. Since 2011, SCI Foundation has partnered with Mississippi State University’s Carnivore Ecology Laboratory and the Missouri Department of Conservation to study the state’s population of bears.

The American black bear (Ursus americanus) was extirpated from Missouri in the early 1900s. The state now has an estimated population of 250-300 bears, after reintroduction efforts began in the 1960s. This population is concentrated in the Ozark Highland Plateau of south-central Missouri, which includes 80% of the state’s total forestland. Researchers know that the bear population is growing, but there is uncertainty on where and how much.

The Missouri Black Bear Project focuses on understanding expansion patterns and the potential for human-bear conflict. Previous data indicates that the population remains less than 500 individual bears, typically the limit for implementing a sustainable harvest. However, investigating recolonization patterns, distribution changes and interactions with humans is important for future management of the Missouri black bear population.

The most recent research seeks to determine the ecological and biological factors affecting detection of black bears. Detection probability is low with large mammal capture-recapture sampling designs, limiting sample size for research. To improve the study’s design, researchers used a combination of DNA hair traps, remote cameras and GPS locators to examine a bear’s detection probability, space use and sex-specific behavior. Using barbed wire hair traps with scented lures is a noninvasive genetic capture method and common practice in wildlife science. Each hair sample collected during the late spring and early summer molting season was genotyped.  Data from GPS tagged bears was then used to determine the likelihood of detecting a bear at a hair trap.

During each 10-day study session for hair traps in a bear’s home range, 85% did not result in detection. This research shows the need to make traps more attractive to increase detection and alter trap spacing to increase encounters sensitive to variation in home range size. Trap spacing should also accommodate differences in movement of male and female bears.

Improving the study’s sampling design is necessary for the larger research goals of surveying the total Missouri black bear population. With the most accurate detection methods, scientists can more precisely estimate population numbers. These results will help conservationists understand Missouri’s black bears and the potential for sustainable management. Research is planned to resume in the summer of 2016.